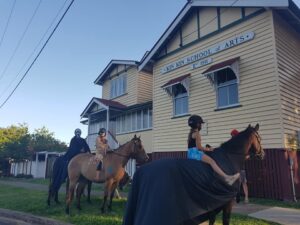 Kin Kin is a small, rural town situated in the countryside between Gympie to the west and the Great Sandy National Park to the north. It is the major freshwater catchment for the Noosa River System situated to the north-west of the Shire. It forms part of Queensland’s first UNESCO Biosphere.

The Kin Kin valley township itself was founded in 1902.

Timber cutters were working in the catchment towards Boreen Point and north “King King Country” in 1865. Giant cedars were removed in 1867 and a mill established at Elandra Point in 1869.

Apart from the river route, access was difficult and delayed the settlement of Kin Kin village. A petition to Government in the late 1890s by prospective dairymen requesting the release of a rich belt of scrub on Kin Kin Creek was denied due to lack of access.

This was the first School of Arts built between Brisbane and Gympie. The building originally comprised a reading room, a library room and a hall, the size of the whole building being 50 feet by 28 feet with a small stage on which stood a new piano.

The hall was originally built on low blocks but was blown off by a cyclonic storm in 1924. Tenders were called and it was quickly rebuilt and proved popular for Saturday night movie nights! The present building is the culmination of several extensions, managed by the Kin Kin Community Group Inc. and available for hire.

Kin Kin boasts more heritage-listed dwellings than anywhere else in the Noosa Shire: 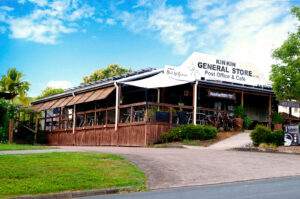 In its heyday, the General Store employed 15 people and anything you needed was available. Salesmen would stay overnight on their way from the port of Tewantin to the Gympie Goldfields prior to the rail line from Brisbane being completed. 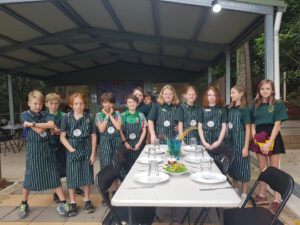 The first school in Kin Kin was Moran Group State School established in 1909 in the front room of Moran’s house on Moran Group Rd. Kin Kin Junction School operated from 1909-1981.

Early records show that the Kin Kin Township Provisional School was established in October 1916 and became a State School in 1921. The School held classes in the Memorial School of Arts Hall for five years before a separate school building was opened in 1921. Over the years the building was upgraded, with a new school building opening in 1962. 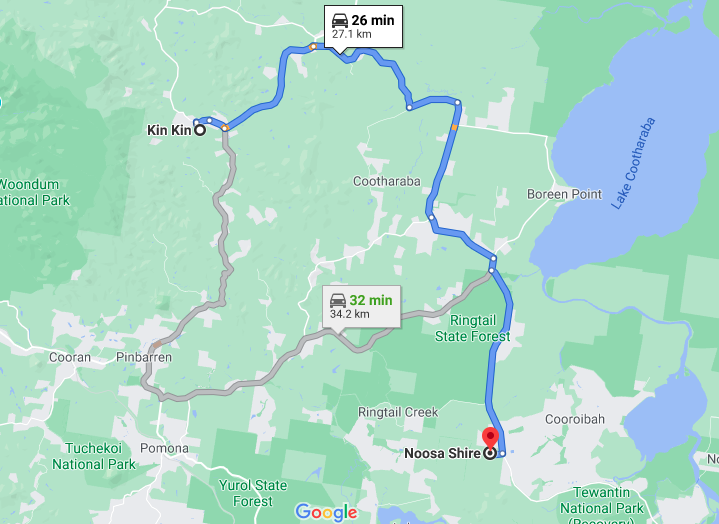 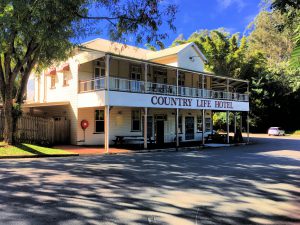 The Country Life Hotel was built a decade after the installation of a road across the ranges to serve the timber industry. It follows the classic style of weatherboard pubs, with wide colonial verandahs and a corrugated iron roof. 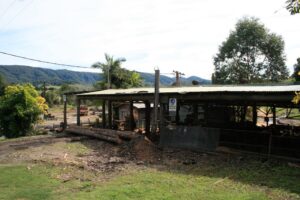 The Kin Kin Sawmill is the only sawmill still operating in QLD since the 1940s. It remains an intact example of a small saw mill originally established to produce timber for fruit packing cases. The basic layout of the shed remains largely unchanged since the 1950s and original items of machinery continue to form key components of the operation. 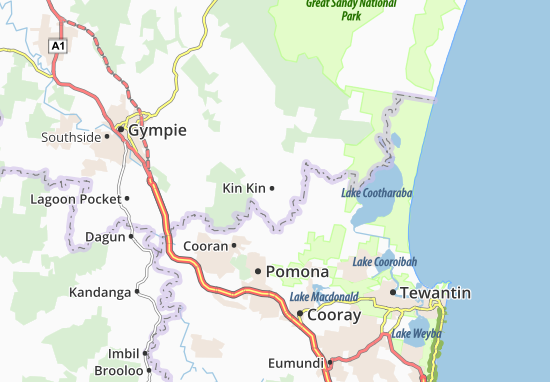 1904  A track is cut over the range and a road constructed. Welcome to Kin Kin!
1905  On 8 June the Lands Department opened 6,000 acres at Kin Kin for selection with the majority of interested buyers arriving from the Northern Rivers of NSW. Within six weeks 2,000 acres of scrub had been cleared and by August, 10 bullock teams were hauling logs from Kin Kin.
1906  Kin Kin experienced a construction boom with surveyors working at Sister Tree and Wolvi to prepare further selections.
1907  Population of 350, with 80 farmers.
1909  Moran Group School established.
1911  Population of 236. Population reduced due to end of logging.
1911  The School of Arts Hall was officially opened on Main Street. A Committee was formed in 1909 for the School of Arts building, with the first minutes recorded on 13 June 1909.
1912  Only businesses are the Kin Kin General Store and a butcher’s shop.
1912  Kin Kin Butter Factory is established. Prior to this, cream from dairy farms was transported overland to Cooran.

1954  The Post Office gained its own building.
1960s Generator usage replaced by electricity connection. A large generator located under the Community Hall of Arts powered some fun Friday night dances, where locals arrived by horse or cart.
1960s Bananas, pineapples and small crops such as beans constituted the main industries.
1971  A tornado rips through the community, killing three people.
1985  Kin Kin Butter Factory destroyed by a mini tornado.
1990s  Macadamia nuts, ginger and to a lesser extent fruit and vegetable and dairying were crops of the time.
2009  Epic flooding from a massive three metre “tsunami” hits the Country Life Hotel sending it, and parts of the town, underwater.
2016  Population of 764 (2016 Census)